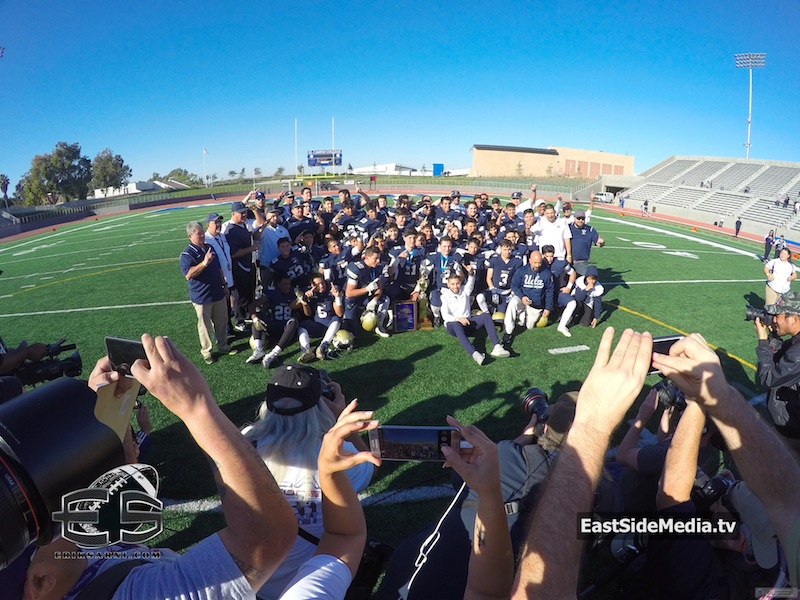 FRANKLIN IS VICTORIOUS OVER RESEDA

Franklin trailed 12-7 in the second quarter when David Telles took the punt and juked multiple defenders on his way to a 51-yard touchdown.

The Panthers never gave up the lead as they scored two touchdowns in the second half to defeat Reseda, 28-17, and win the CIF L.A. City Section Division III championship at Murdock Stadium on Saturday.

“I was just waiting for that one play,” Telles said about the punt return for a touchdown. “As soon as I scored, I knew we were going to win this game.”

Reseda got on the board first when Mike Martin III connected with Ja’lani Elison for a 50-yard touchdown, giving the Regents a 6-0 lead. Elison scored his second touchdown on a 53-yard run to give Reseda a 12-0 lead with 1:53 remaining in the first quarter.

Franklin quarterback Mario Bobadilla hit Telles for a 29-yard touchdown to cut the Regents’ lead, 12-7, in the second quarter.

“We played our game and we knew what we had to do,” Bobadilla said. “Once we scored the touchdown coming out of halftime, we knew the game was ours.”

The Panthers took a 13-12 lead into halftime after Telles returned the punt for a score. On the first play of the second half, Telles took a short pass and outran the Regents’ defense for a 69-yard touchdown.

Reseda responded when Elison scored on a 36-yard touchdown run to cut the Panthers’ lead, 20-18, in the third quarter. After a sack by Franklin linebacker Erick Nolasco on third-and-goal, the Regents missed a 34-yard field goal.

“We knew this game was going to be a battle,” Teles said. “We started off slow but we came back.”

Guillermo Cordova hauled in a 12-yard touchdown pass to give Franklin a 27-18 lead with 8:12 left in the fourth quarter.

“It’s a great thing for the community of Highland Park,” Franklin coach Narciso Diaz said. “This kids put in the time during the spring and summer. They represented the community well.”

Thank you so much to everyone who’s contributed to our campaign to celebrate Panther’s Championship Win. Can you help us get to $5,000? Once we do Coach Diaz and Staff will participate in the “CakeFace 🎂 👦 Challenge”. You can help by donating or sharing our page