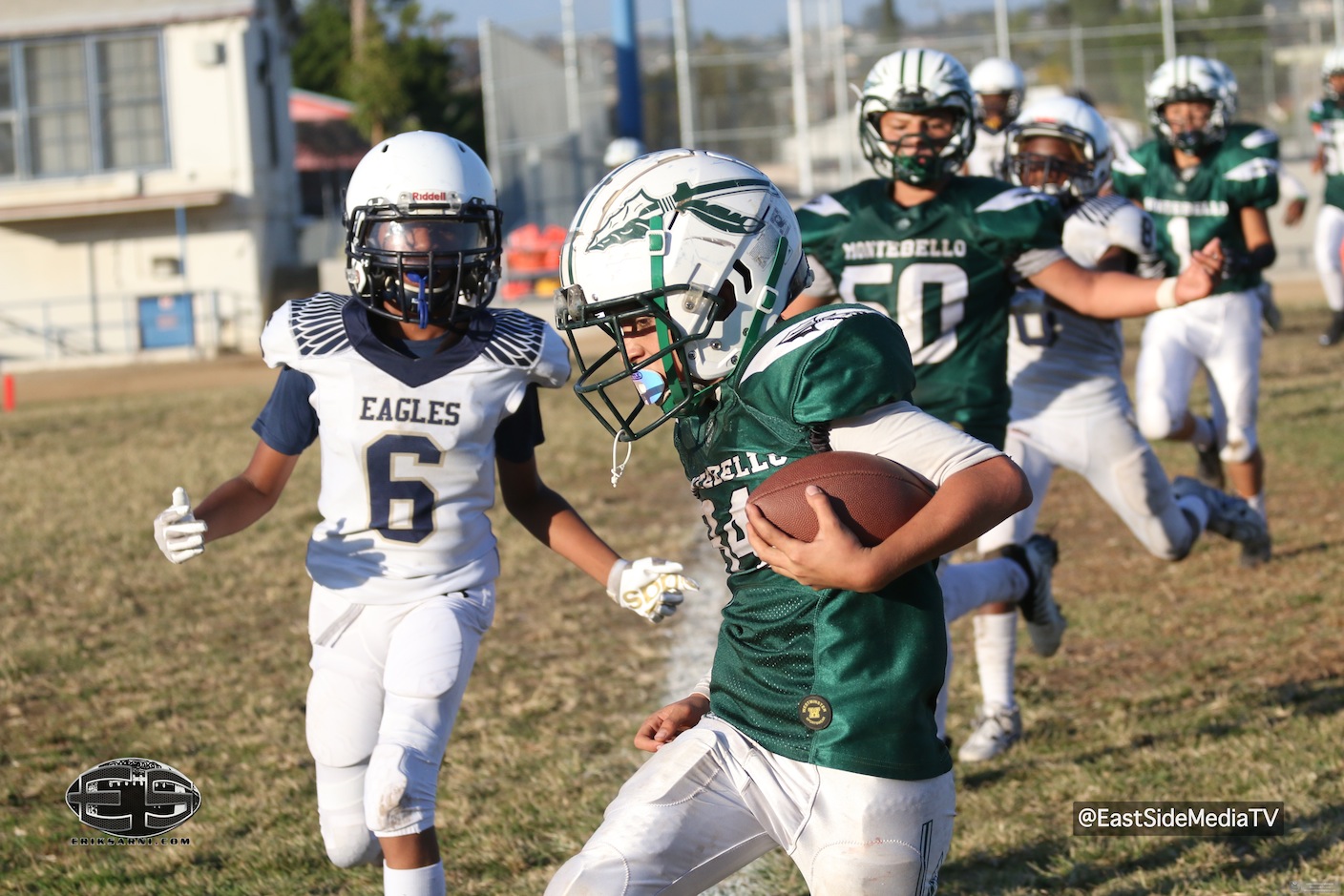 Rewinding back to Saturday morning on October 1st, nothing was settled. In a regular season  matchup, the Montebello Indians and El Segundo Eagles battled to a scoreless tie, 0-0. This could not be  the case in a playoff game. There had to be a winner. Both would come into the game with identical 8-0- 1 records.

In an epic war, the Tribe hunted down the Eagles and prevailed 16-14 with a late drive to end the game  and catapult them to the Championship game versus the Rosemead Rebels on Sunday November 20th 11:30am @  Schurr High School.

Indian Head Coach Chad Aldaco stated, “We knew they would be tough based on our first encounter,  but today we proved we were the superior team.” He went on to say, “I take nothing away from that  squad, great adversary and they brought out the best in our kids, the boys definitely wanted another  crack at them.”

The contest started out with a bang when on the first play from scrimmage, Jorge Aldaco #34 (RB/DE)  exploded for a 75-yard score. However, it was called back for an illegal shift. This set the tone for the  entire first half which was marred by penalties and great defense from both ends.

The Eagles scored on the last play of the first half on a broken play. They converted the two-point  conversion to send the game into halftime 8-0.

El Segundo received the ball to start the second half but fumbled on the second play and the Indians  recovered. On the ensuing drive, Aldaco scored on a 5-yard run to cut the deficit to 8-6. Ian Do #2  (QB/DE) ran in the 2 points to tie the game, 8-8.

El Segundo took the lead early in the 4th quarter on a 10-yard run to make it 14-8. The attempt for the  points after failed. Montebello then went on a time-consuming drive and with 45 ticks left on the clock,  Aldaco once again came to the rescue with a 10-yard sweep to tie the score, 14-14.

Ian Do’s number was called once again, and he delivered by punching in the two points on a QB sneak.  Indians 16 Eagles 14.

The Eagles got denied with a tackle for a loss on 1st down by “BIG” John Noriega #50 (OG/DT) and called  a timeout with 30 seconds left. Sergio Herrera #33 (Safety) sealed the deal with an interception to send  the Indians to play for the title. The Indians moved to 9-0-1 and the Eagles season culminated with a  record of 8-1-1.

The Defense was led by #1 Joseph Cedillos (WR/LB), #7 Julian Reyes (LB), #5 Tristian Simmons (DE), #52  Nathan Lopez (OLB) and the aforementioned Noriega. The Indian offense held the ball for a quarter and  a half in the second half to assert their dominance.

“I’m very proud of the boys and I know they are looking forward to playing for “The Ship,” they have  earned it and we’ll be ready for Rosemead,” said Aldaco.