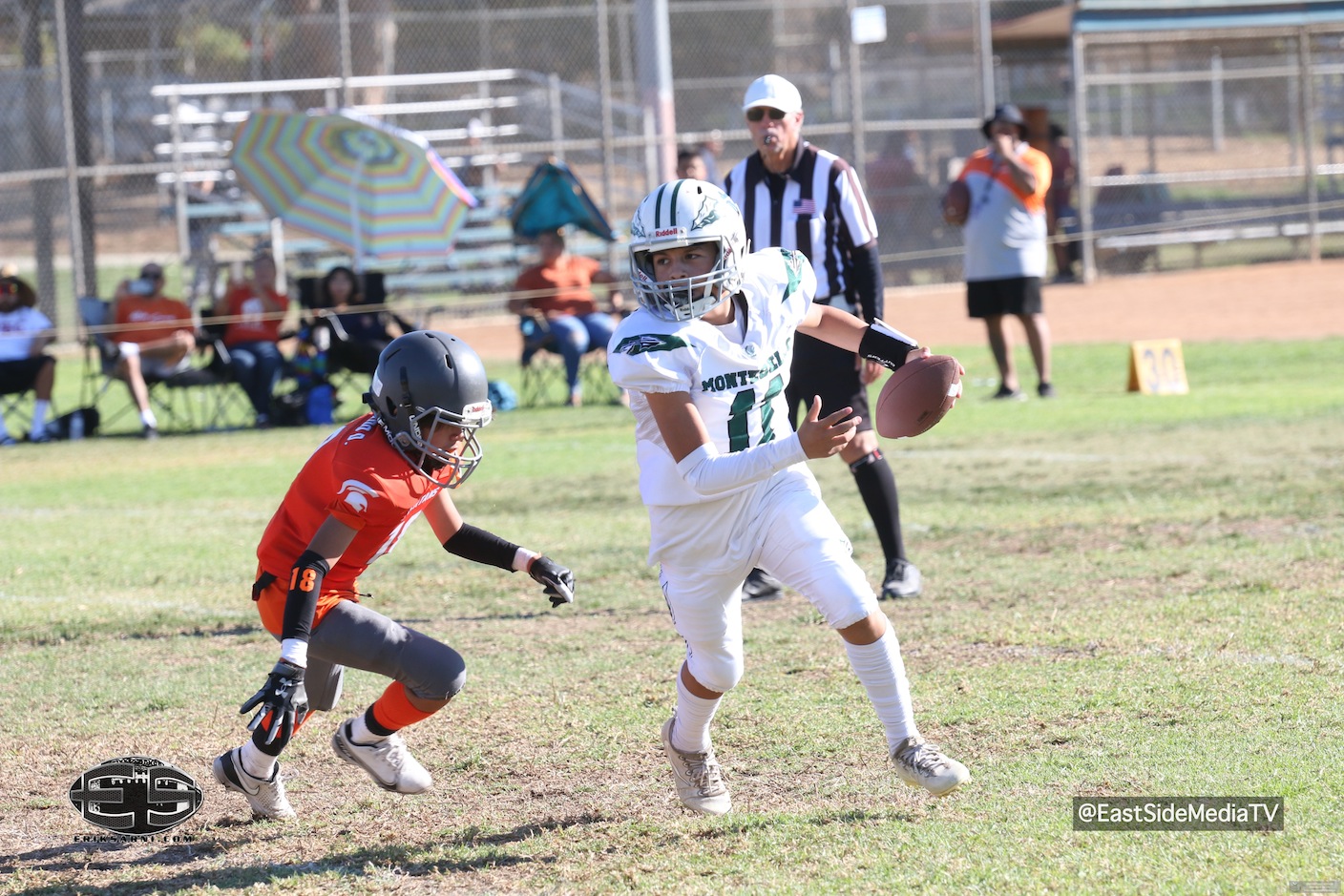 By Alfonso Rivera Jr.
After losing their initial game to commence the season. The Indians have reeled off four consecutive victories in astounding fashion.
Following the defeat to Pico Rivera, the team has been invigorated.
The first victims were the El Sereno Stallions, falling 28-0. The El Monte Jets were the next to succumb 38-12.
The squad then proceeded to demolish both the Huntington Park Spartans and the El Segundo Eagles by the exact same result, 38-0.
“That blemish on our record has taught the boys a few things, stated Head Coach Greg Nevarez”
“Overcoming adversity. They fell, dusted themselves off and got back up.”
Against the Spartans QB #11 Bryan Trevizu got things going with a 40 yard scramble to the end zone. The two point conversion was no good. Caleb Ramirez #31 (RB/LB) had a 35 yard touchdown run to make the score 12-0. Vincent “V” Naranjo #2 (RB/LB) ran in the 2 point attempt making it 14-0.
Trevizu struck again right before halftime with a 40 yard interception return to the house. Naranjo capitalized again with the two points sending it to halftime 22-0.
Trevizu then connected with Cristian Reza #44 (WR/LB/DB) on a 50 yard screen pass to make it 28-0. Ramirez ran in the two additional points to end the 3rd Quarter with the score 30-0.
Nathaniel Flores #1 (RB/DB) capped off the onslaught with a 20 yard scamper into the end zone. Naranjo again delivered the 2 point conversion to end the scoring, 38-0.
“The team has grown as the weeks have gone on said Assistant Coach Eric Montanez. “They have become more tactical, aggressive and are minimizing their mistakes on the field.”
Against the Eagles of El Segundo, The Team put together their most complete and cohesive performance of the season.
Following an interception by Reza deep in Eagle territory, Flores ran in from 3 yards out to begin the scoring. Trevizu ran in the 2 point attempt to make it 8-0 Indians. Punting from their own end zone on the following drive, El Segundo surrendered a 13 yard punt return for a touchdown by the aforementioned Trevizu.
Jesse Andrade #13 (QB/RB/DB) converted the additional two points to make the score 16-0.
Antonino “AJ” Nguyen #18 made the tally 22-0 with a 15 yard touchdown run. Ramirez attained the 2 points, lifting the margin to 24-0 at the half.
After a fumble recovery by Naranjo, Ramirez proceeded to score on a 15 yard run. Andrade made good on the points after the touchdown, 32-0.
Naranjo ended the scoring with an 8 yard trek into the end zone. The conversion failed. Final result, 38-0.
“Our defense was stellar today said Montanez. Hats off to the unit as a whole.”
Notable standouts were Giovanni Solorzano, #51 (DE/T) who wreaked havoc all day in addition to collecting a few sacks.
Ethan Gomez #55 (DL/G), Adam Gates #58 (C), Timothy Gama #99 (DL/G) and Joee Vargas #60 (DL/T) anchored the line and were effective in the trenches.
Flores made some notable plays at corner and Miko Acosta #5 (S) played a steady Safety.
The Indians, 4-1 will travel to East Los Angeles this coming week and will then host Azusa and Whittier to finalize the regular season.
For full photo galleries click logo below and search photo albums