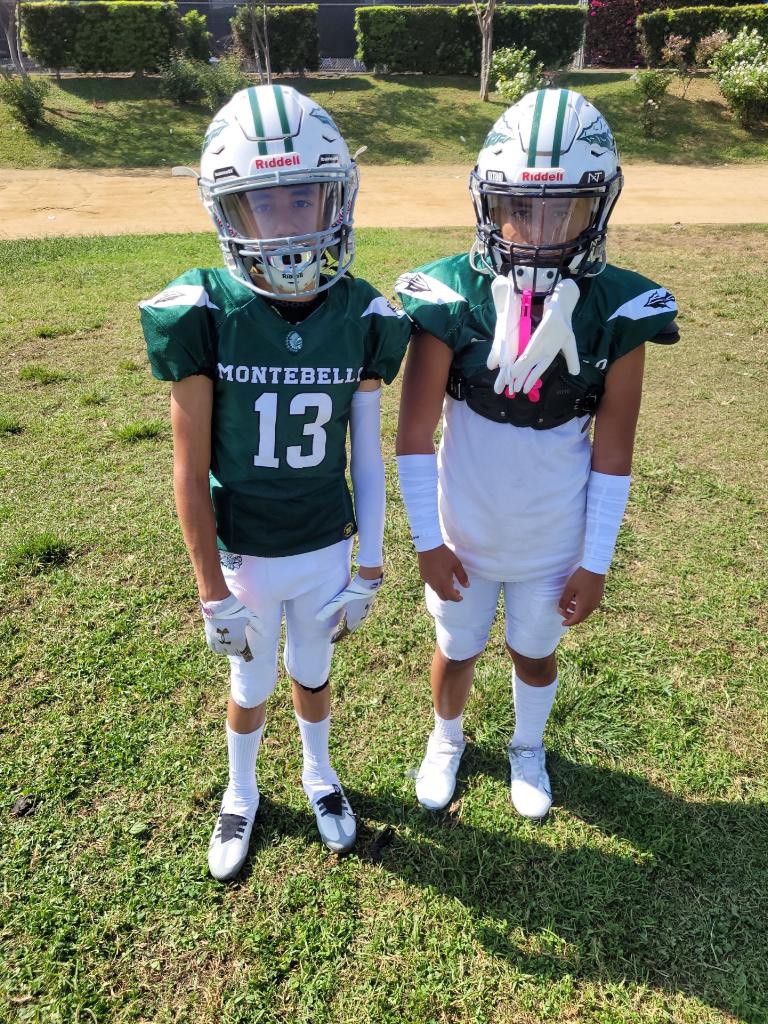 In a game marred by flags and questionable officiating. The Montebello Pee Wee (12U) squad was undeterred and clobbered the hosts, 44-0 on Saturday 10/8 @ Garfield High School in East Los Angeles.
A visiting teams concerned parent who chose to remain anonymous, stated. “I understand that the safety of the kids is the utmost priority. However, this is football. It’s a violent sport. Aggressiveness and hard hitting have always been a part of the game. Bottom line, let them play!”
The tribe opened up the scoring with a 7 yard touchdown run by Vincent “V” Naranjo, #2 (RB/LB) in the 1st quarter. The extra point conversion was nullified. Indians 6 Bulldogs 0.
Bryan Trevizu, #11 (QB/LB) scrambled in a 43 yard run to make it 12-0. Naranjo converted on the 2 point conversion with a run up the gut.
14-0 visitors.
Following a three and out by the defense. Jesse “Bundy” Andrade, #13 (RB/S) returned an electrifying 59 yard punt return to send the score to 20-0. Naranjo once again capitalized on the conversion. 22-0 Montebello. Trevizu then returned a 53 yard interception and Antonino “AJ” Nguyen, #18 (RB/WR/DB) scored the two point conversion to send it to halftime 30-0 Indians.
Naranjo struck again with a phenomenal 68 yard run into the end zone to keep the scorekeeper busy and make it 38-0. Trevizu was successful on the points after the touchdown.
The road team ended the mayhem with an acrobatic 67 yard pick six by Christian Reza, #44 (RB/WR/LB/DB). The game was halted following this play. Final tally, 44-0 Indians.
Along with the previously mentioned Naranjo, Trevizu and Reza. The defensive domination was led by Giovanni Solorzano, #51 (DE/T), Ethan Gomez, #55 (DL/G), Adam Gates, #58 (DL/C), Timothy Gama, #99 (DL/G) and Caleb Ramirez, #31 (RB/LB). Nathaniel Flores, #1 (RB/DB) turned in another solid performance in the secondary.
Montebello moves to 5-1 with the triumph and will close out it’s regular season hosting Azuza on 10/16 and Whittier on 10/23.
“The team seems poised and is steadily improving as they head into the post season,” stated assistant coach, Johnny Garza.

In One For The Ages, Jr. Pee-Wee Indians Oust Eagles  With Late Comeback, 16-14, Propelling Them To The  “Ship!”