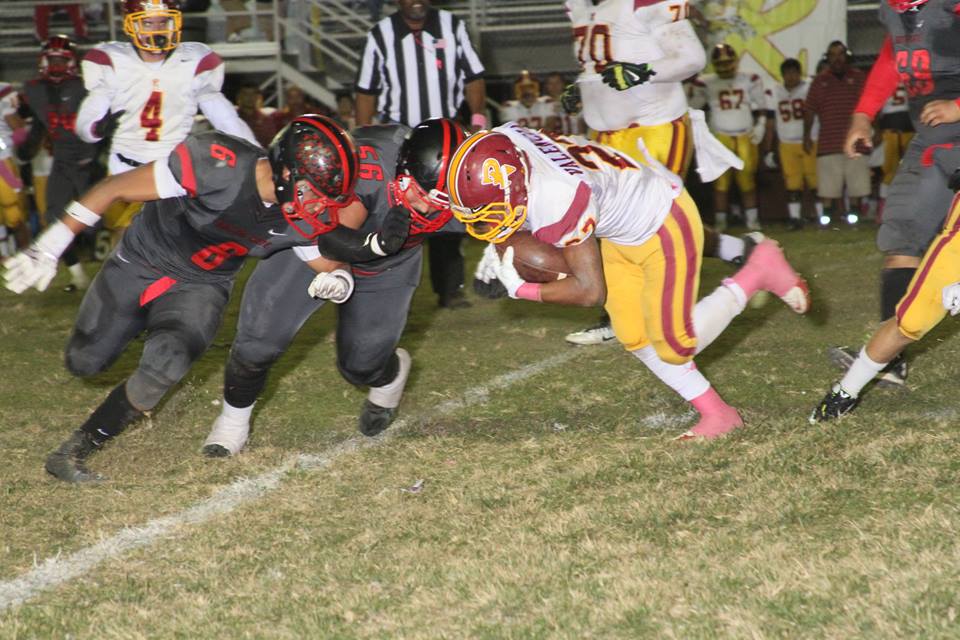 “FEATURED GAME OF THE WEEK”

Recap: The “Rams” speed, size, physicality, and depth were the major differences in this statement win over the visiting“Rough Riders.” The game started like many others this season for the Rams as their electrifying and All-City running back, Lavell Thompson, took the opening hand-off, broke cleanly to the outside and scored on a 65 yd. run. The Rams were quiet until a 2nd period 51 yd. TD pass from Andrew Toro to Antonio Washington made the score 14-6. By the 2nd quarter, the Riders were countering South Gate’s offensive intensity with good defense while their offense began to click through runs and passes. With 5 minutes left in the 1st half, the Riders scored on a“gadget” play from a receiver turned QB, who then completed a 30 yd. TD pass to the true QB, Sammy Hernandez. This made the score Rams 14-Riders 13 at the half. The 3rd quarter featured only one South Gate TD, however, with 9 minutes remaining in the 4th quarter, the mood and complexion of the game turned extremely unsportsmanlike as two Roosevelt players were ejected from the game. At the 6 minute mark, a South Gate player was banished, also for the same infraction. As a sidebar note to the ejections, per the L.A. City Section Commissioner’s Office, the penalties applied to the students/players are the following: suspension for one game and they are required to complete the National Fedration of High Schools (NFHS) sportsmanship On-Line course before they can return to play. Knowing that the opponent was at a loss to replace its ejected players, the Rams then literally took advantage of the situation, and began to score on an assortment of plays. Needless to say, the Riders defensive unit was never the same after the ejections. The Rams added 3 more TDs in the 4th quarter, while the Riders only managed to score on the final play of the game, an 88 yd. kick-off return by Francisco Franco. South Gate goes to 3-0 in League, 6-1 Overall, while Roosevelt drops to 2-1 in League and 4-3 Overall.

Roosevelt Players of The Game (POG) – Overall: Francisco Franco/JR/RB/20 rushes/128 yds/1 TD; Offensive POG: Francisco Rodriguez/JR/OL; and Defensive POG: Cesar Ramirez/SR/LB/12 tackles; & Angel Sanabria/JR/DB/credited with a “key” interception right before the half to stop a scoring opportunity for the Rams with a minute left. This play kept the score close at half time. Next: South East @ Roosevelt, 10.24.14  JC/RHS & RC, Sr./ELASS