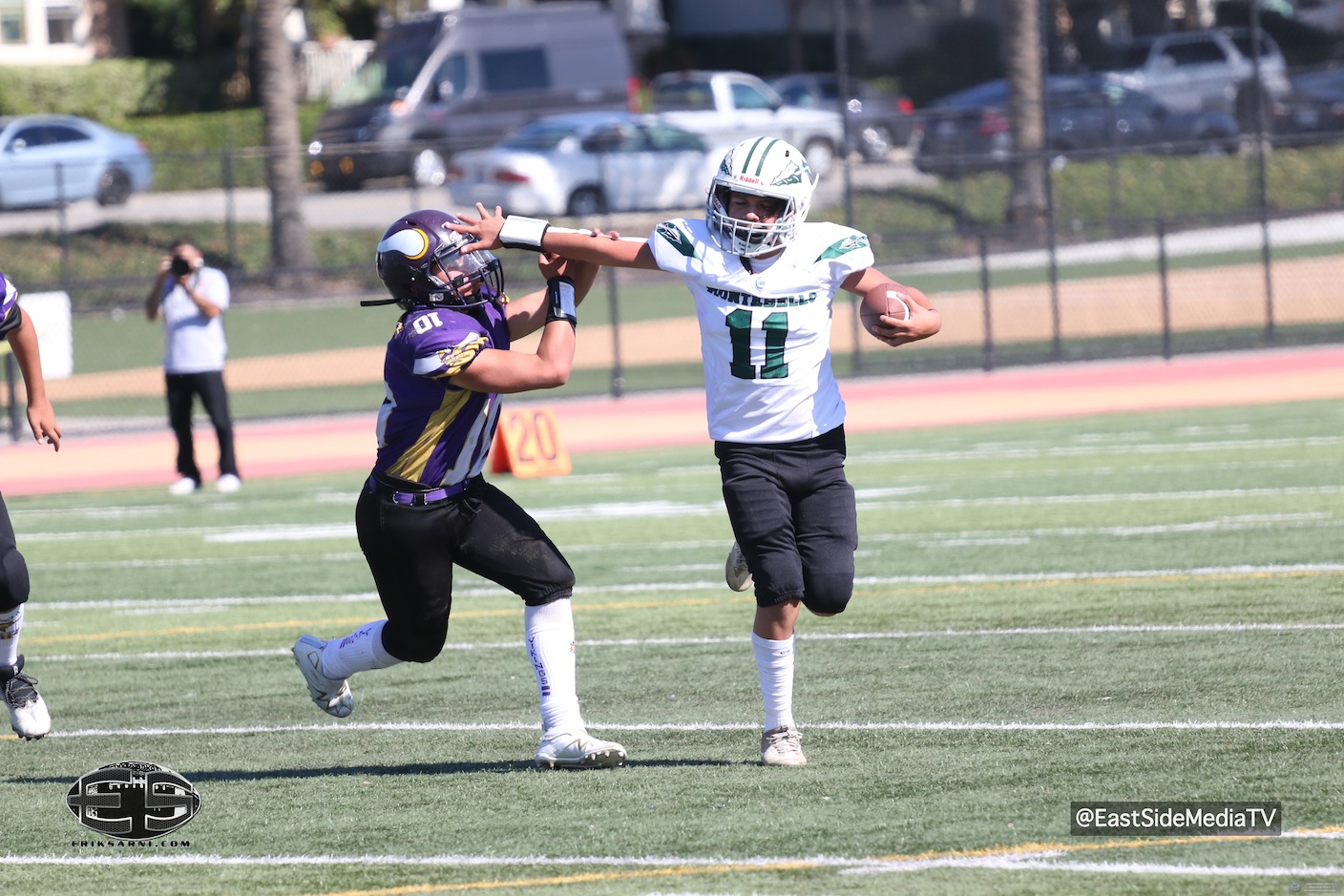 The Montebello Indians triumphed over the Covina Vikings in a game of ball control and smash mouth football 22-0. The combination of multiple running backs the Indians unleashed was successful in the contest.

Usual suspect, Vincent “V” Naranjo #2 (RB/LB) led the charge with 2 touchdowns from inside the red zone. The initial score came on the time consuming opening drive putting the visitors up 6-0. The conversion was no good. Naranjo once again scored prior to halftime, with Christian Reza #44 (RB/LB) adding the 2 points. Halftime marker, 14-0.

The running back committee included Reza, Miko Acosta #5 (S/RB), Nathaniel Flores #1 (DB/RB), Antonino Nguyen #18 (RB/WR/DB) and Jesse Andrade #13 (DB/RB/WR/QB). All of them carried the rock various times to march the tribe with ease.

Bryan Trevizu #11 (QB/LB) returned a brilliant interception 40 yards to make it 20-0 in the 3rd quarter, the two point conversion was successful by Naranjo to finalize the scoring, 22-0.

The defense was led by Giovanni Solorzano #51 (DE/T), Joee Vargas #60 (DL/G), Adam Gates #58 (C/DL), Eli Tejeda #33 (LB) and Caleb Ramirez #31 (DL/LB) who all applied constant pressure on Covina’s signal caller. The secondary exhibited a noteworthy performance with various deflections and 3 picks. Flores and Andrade each with one and the return by Trevizu mentioned previously. Andrade also recovered a fumble to amass 4 total takeaways from the Vikings.

“We wanted to set the tone early and be aggressive from the start and the boys responded to the challenge, “ stated Head Coach Greg Nevarez.

With the victory, the Pee Wee (12U) Indians will now face #1 seed and undefeated West Covina Gold Saturday in the semi-finals Nov 5th @ 4pm at Downey High School.