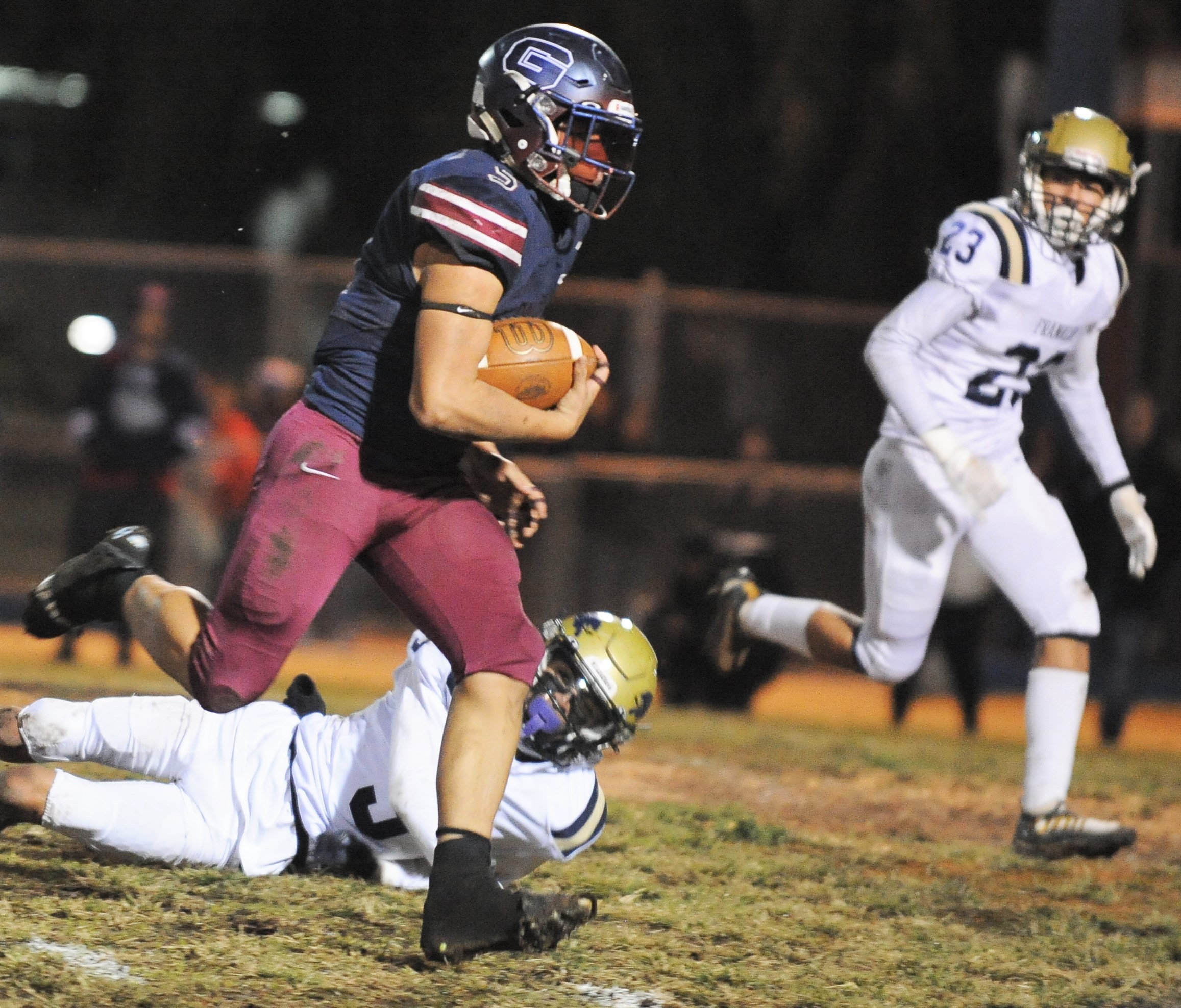 In a back-and-forth contest, the #4 seed Garfield Bulldogs broke the game wide open in the fourth quarter to defeat the #5 seeded Franklin Panthers on Thursday November 10th at Garfield High School in East Los Angeles.

A prolific passing assault versus a vaunted running attack was the expectation of the contest. It definitely did not disappoint.

It actually brought back memories of a game that was played 33 years ago in 1989 to determine the 3A City Champion between these same two schools. That day, the team from Northeast Los Angeles (NELA) prevailed, 24-6. Why was it a nostalgic comparison? That particular Franklin team was led by a signal caller by the name of Santiago “Chago” Alvarez. The former All City Quarterback passed for over 4,000 yds that season and threw 52 Touchdowns, a then state record.

Garfield on the other hand possessed All City Running Back Hilario Espinosa, who amassed a then city record 2,142 yards and crossed the end zone 25 times.

Fast forward to 2022. The Panthers are led by Sophomore QB Eduardo Cuevas who came into the game as the 3rd ranked QB in the city with 1701 passing yards along with 18 touchdowns. The Bulldogs workhorse is junior Running Back Damian Cornejo who came in ranked the #6 ball carrier in the city with 1,314 rushing yards and 23 scores. Both players lived up to their billing.

Cuevas threw for 376 yards with 2 visits to the end zone and Cornejo carried the pigskin 15 times to accumulate 164 yards on the ground and score 4 touchdowns.

The visitors scored first on an 18-yard run by Running Back Omar Gardella. The Bulldogs answered back with an 18-yard score of their own by Cornejo to make it 6-6. Both teams missed the PAT (Point After Touchdown).

On the ensuing drive, Cuevas connected on an 80-yard dart to Wide Receiver Jose Villalobos to make it 13-6 with the point after this time being successful. Cornejo scored his second touchdown of the game on a 20-yard run to make it 13-12. The kick was good to knot the score at 13-13. After an interception by Defensive End Donovan Reyes, Cornejo struck again this time from 8 yards out and also ran in the 2- point conversion to give the hosts their first lead of the game late in the second quarter, 21-13. The Panthers kicked a field goal right before halftime to make the score 21-16 Bulldogs.

The second half started off with a bang with Wide Receiver/Strong Safety Paul Ramos returning the kickoff 90 yards to make the score 27-16. The PAT was missed. Franklin responded with a 3-yard rushing score by Running Back Jonathan Velasquez. The extra point made it 27-23.

Cornejo then proceeded to break a 40-yard run to cross the goal line for the fourth time. He added the two-point conversion as well. Garfield 35-23. Cuevas fired back with a 17-yard strike to Wide Receiver Jayden Steele. The two point try was stopped ending the 3rd quarter with the scoreboard reading 35-29.

Running Back Rob Sanchez (20 carries for 136 yards) got in on the action with a 13-yard touchdown run to make it 41-29. Quarterback Damian Cabrera then connected on the 2-point conversion with a pass to wideout Angel Garcia to make it 43-29 in favor of the home team. Following a fumble recovery by Reyes, Cabrera hooked up with Wide Receiver/ Defensive Back Jayden Barnes on a 40-yard pass to make it 49-29. The kick split the uprights and ended the huge fourth quarter onslaught by the Bulldogs. Final Score 50-29.

Garfield will host the Eagle Rock Eagles (10-1) on Friday November 18th. The Eagles upset the top ranked and undefeated San Pedro Pirates 38-31 in Overtime. Ironically the Eagles lone defeat came at the hands of Franklin. The Panthers end their season at 10-1 with this being their only blemish of the season. The Bulldogs move to 9-2 with the victory.

Photos by Mario Villegas for East Side Media