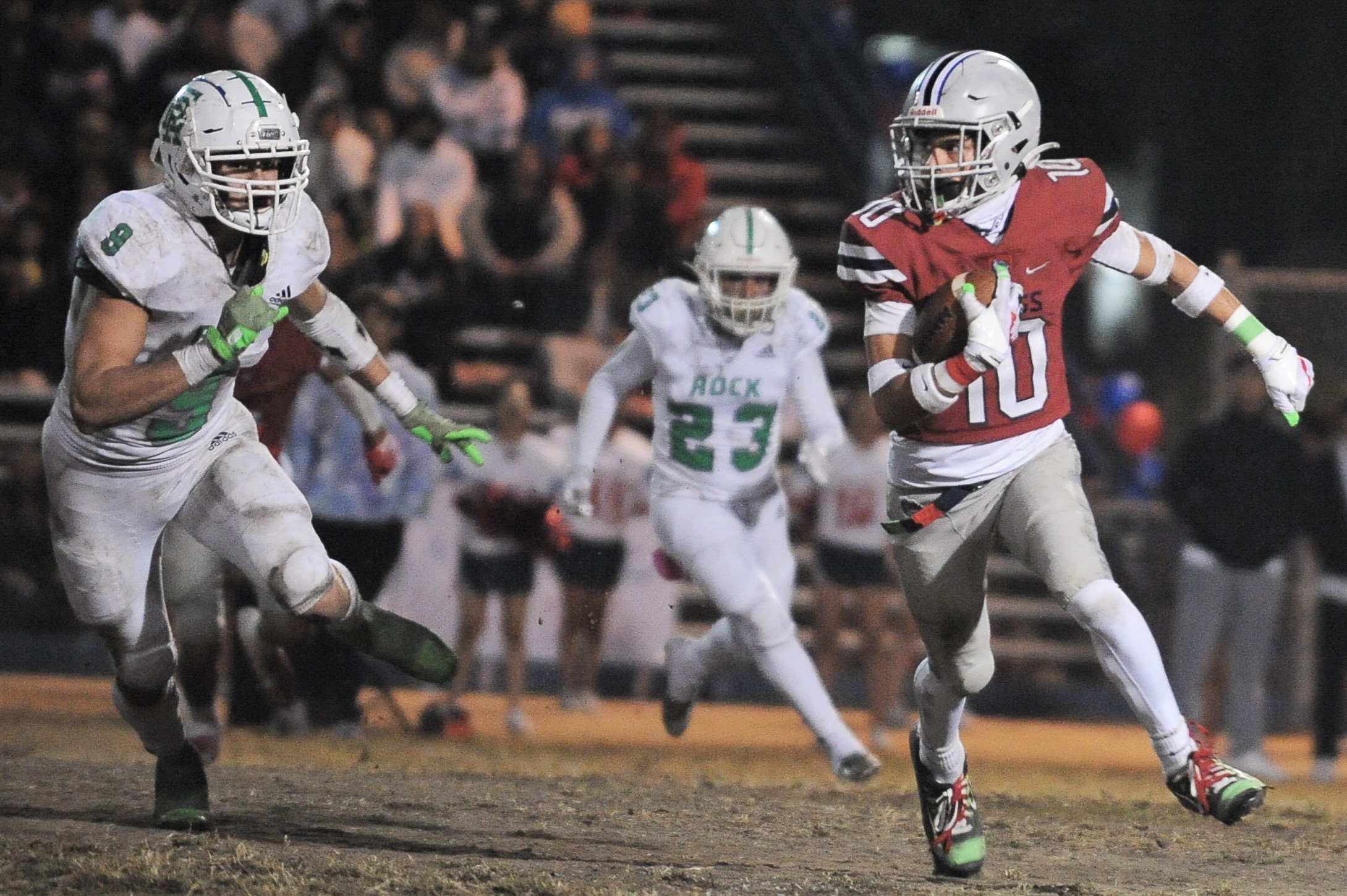 In a hotly contested battle on Friday 11/18 @ Garfield High School in East Los Angeles. The Garfield Bulldogs finally shook the pesky Eagle Rock Eagles to advance to the Championship game in the open division versus the two-time defending open division champion Birmingham Patriots.
The hosts opened up the scoring early on a 1-yard touchdown run by Quarterback Damian Cabrera, PAT was good, 7-0. In the second quarter Cabrera connected on a 27-yard strike to Wide Receiver Jayden Barnes to put the Bulldogs up 14-0 following another successful extra point.
Eagle Rock responded with a 6-yard touchdown pass from QB Tanner Erwin to WR Barry Weatherspoon, the point after was missed, Garfield 14 Eagle Rock 6. Eagle Linebacker and the City’s #2 leading tackler Brooklyn Pasten recovered a fumble at the Bulldog 39 on their ensuing drive. That led to a 9-yard fake field goal touchdown run by Ryland Bailey-Roque to make it 14-13 after the PAT was made.
Before the half Garfield added another score and point after the touchdown on a 12-yard run by RB Damian Cornejo taking the game into the half 21-13.
An amazing 60 yard run by Bailey-Roque made the score 21-19. The extra point made it 21-20 early in the 3rd quarter. Cornejo returned the favor with an 11-yard score to make it 28-20 following another efficient PAT. Kicker Dylan Benitez converted on a 23-yard field goal to make it 31-20 going into the final quarter.
The Bulldog defense held the fort down in the 4th quarter, not enabling the Eagles to muster a counterattack. Cabrera made the final trip to the end zone for Garfield on a 2-yard run to make it 37- 20. Kicker Joseph Regalado was perfect in the contest, making his 5th extra point of the evening. The scoreboard read 38-20 as the final outcome.
Cornejo finished the night with 26 carries and 206 yards on the ground. Cabrera threw for 203 yards and an aerial touchdown along with his 2 additional scores with his legs. Barnes grabbed 6 catches for a total of 168 yards receiving.
The stout Bulldog defense was led by Juju Zamudio who had 12 total tackles, including 3 for a loss and 2.5 sacks. Donovan Reyes also had 2.5 sacks and added 8 tackles, Joshua Estrada had 6 tackles and recovered a fumble. In the secondary, Isaak Naranjo contributed 9 tackles and had a pass deflected as well.
Garfield (10-2) will now play the Birmingham Patriots (8-4) on Saturday 11/26 @ LA Valley College to try and end their two-year reign as City Open Division Champions. Kickoff is slated for 7pm.