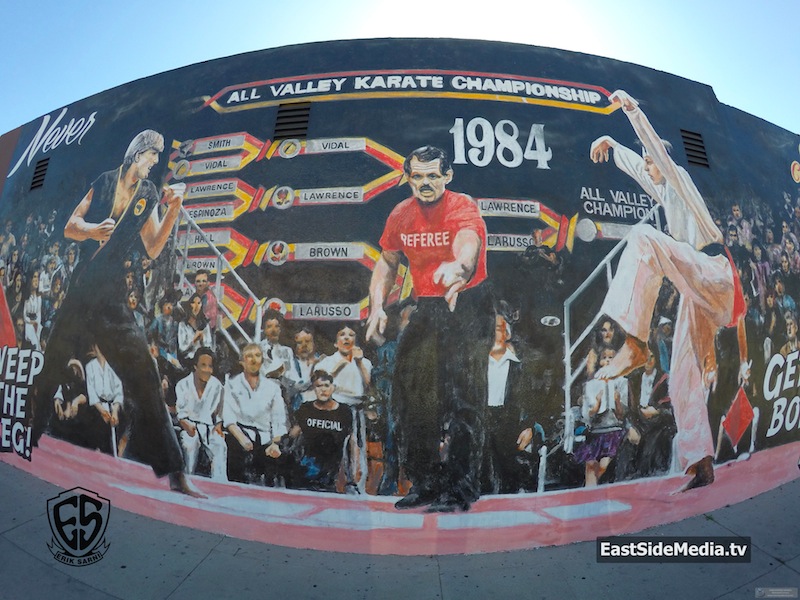 Certainly one of the top movies of the ’80s, if not all-time.

“The Karate Kid” is the tale of Daniel Laruso (Ralph Macchio), a young man who, on the heels of his mother’s finding a new job, is uprooted from Newark, New Jersey, to the sunny shores of California. Daniel’s mother has visions of a new start, a new life with the sky as the limit. Daniel, however, quickly finds that, for him, the West Coast holds nothing but hard times.

With the comforts of his rough, middle-class neighborhood thousands of miles away, Daniel tries to make friends and blend with the well-to-do, upper-class kids in his new home. At first, Daniel seems to do alright but, before long, he crosses paths with Johnny (William Zabka), the tough, rich leader of a group of karate students who attends Daniel’s new school. To make matters worse, Johnny is the ex-boyfriend of Ali (Elisabeth Shue), a girl Daniel is pursuing.

Enter Miyagi (Noriyuki “Pat” Morita), an aging handy-man who works at Daniel’s apartment building. Struggling for friends and failing to fit in, Daniel finds support in Miyagi. After enduring several beatings at the hands of Johnny and his gang, Daniel comes to learn that Miyagi, in fact, knows karate. Following a vain attempt to speak with Johnny’s karate teacher (Martin Kove) about being left alone, Daniel is suddenly entered into the All-Valley Karate Tournament, where he will attempt to win the respect that Johnny and his gang have taken.

As he trains for the karate tournament with Miyagi, Daniel learns invaluable lessons about life and love. And brought to the foreground of this karate story is Daniel’s pursuit of Ali, who truly is the single person who gave the new kid a chance.

On many levels, “The Karate Kid” is an uplifting movie. It illustrates how a lonely, out-of-place kid triumphs against the odds, and the movie doesn’t need computer-animation or special effects to get its story across. But, for me and anyone who loves ’80s movies, the “The Karate Kid” has to be appreciated for its nostalgia trip back to “better times.” For that reason alone, this movie is a classic.

I’ve enjoyed few movies, if any, more than “The Karate Kid.” I highly recommend this flick to anyone who loves a touching, uplifting story, or to anyone who simply can’t get out of the ’80s!!!