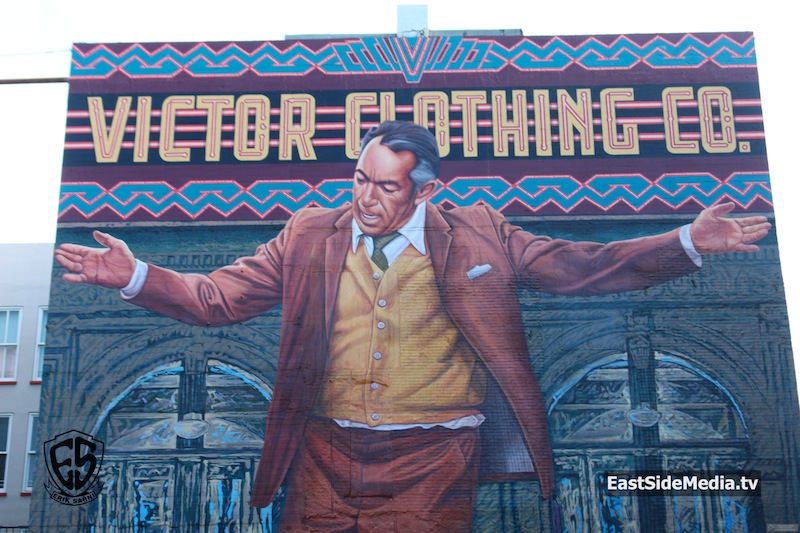 Historic ‘Pope of Broadway’ Mural Gets New Life After Restoration
BY TIM LOC IN ARTS & ENTERTAINMENT ON JAN 24, 2017 11:40 AM

Los Angeles City Councilmember José Huizar held a conference on Tuesday to celebrate the restoration of “The Pope of Broadway,” a 70-foot mural of actor Anthony Quinn that presides over South Broadway in downtown. The restoration comes after the mural had endured nearly three decades of exposure. Back in 2014, when the rehab effort was first announced, Huizar called the mural “a testament to the Latino community’s importance to the history and vitality of Broadway in the 70s and 80s.” On Tuesday, Huizar tweeted from the ceremonial unveiling:

The looming portrait, which graces a side of the Victor Clothing Company building, was first painted in 1985. According to KPCC, the company had wanted to tip its hat to its Latino clientele, and the bigwigs turned to muralist Eloy Torrez for ideas on what the subject matter would be.
“We’d talked about what Latino that I think would be the equivalent of a Humphrey Bogart, Fred Astaire. For me it was a no-brainer,” said Torrez. His mind went to Anthony Quinn, the Mexican-born actor who’d gained prominence through classics such as Lawrence of Arabia and The Guns of Navarone.
Quinn was born in Chihuahua, Mexico in 1915 to a half Mexican, half Irish father, and a half Mexican, half Native American mother. His family relocated to Los Angeles shortly after his birth. Despite the fact that he’d lived as an American for the majority of the life, he was forever cast as The Other. In fact, he landed one of his first roles (in 1936’s The Plainsman) by pretending to have Cheyenne ancestry. And from there he “hardly ever played an American, except a native one. His most famous portrayals were as Greeks, Mexicans, Frenchmen, Italians, Arabs and even an Inuk,” according to the Guardian.
He won the Oscar for Best Supporting Actor for 1952’s Viva Zapata! (which had a screenplay penned by John Steinbeck!). Here, Quinn played second fiddle to Marlon Brando’s Emiliano Zapata, who was gussied up with a mustache, a sombrero, and a seemingly exaggerated tan. It was Quinn, however, who took home the honors at the Academy Awards (Brando was nominated but lost out to Gary Cooper for his role in High Noon). Quinn’s second Oscar came for his portrayal of post-Impressionist painter Paul Gauguin in 1956’s Lust For Life.
Of all the movies he’s done, however, it’s Zorba the Greek (1964) that’s most cited as the inspiration for “The Pope of Broadway.” In the movie, Quinn plays the effervescent Zorba, who at one point does a Greek dance with his English writer friend:

While the figure in the “The Pope of Broadway” does seem to be a nod at Zorba (what with its outstretched arms, and its head nodding to a silent rhythm), Torrez’s intent was to honor Quinn’s work in live theater, according to Huizar’s website. Specifically, Torrez had wanted to honor Quinn’s early days at the nearby Million Dollar Theater. As noted by the Los Angeles Conservancy:
In the 1950s, the Million Dollar became the first theatre on Broadway to feature Spanish-language variety shows (variedades), including headline acts from Mexico City and Latin America. The theatre served as a leading Latino entertainment venue for decades, featuring variedades and Mexican film premieres.
“The Pope on Broadway,” then, is not just a celebration of Quinn’s work. It’s also a reminder of his ties with the Latino community in L.A., and his place in history as a trailblazer. Quinn passed away in 2001.
According to the L.A. Times, the restoration project comes with Huizar’s “Bringing Back Broadway” program, a 10-year plan to return Broadway to its halcyon days as a glitzy thoroughfare. This project helped usher in the return of Grand Central Market, as well as plans for more pedestrian walkways (there’s also a proposal for a streetcar that’s seen its share of bad press). For the mural, Huizar had secured $150,000 in funding from Chinese developers Greenland USA, which is responsible for the massive, upcoming Metropolis development in downtown.
So who was selected to handle the restoration? Torrez, of course. Speaking to KPCC, Torrez said that he’d expected the project to come with a dose of nostalgia. “It’s going to be interesting. It could be a time travel experience, maybe. I can be 27 again, up on that wall,” said Torrez.
Well, Torrez’s work is done. And if the images are any indication, “The Pope” is back to his former glory. Here’s a comparison of what was, and what’s present:

The Victor Clothing Company Building is at 242 S. Broadway in downtown Los Angeles.