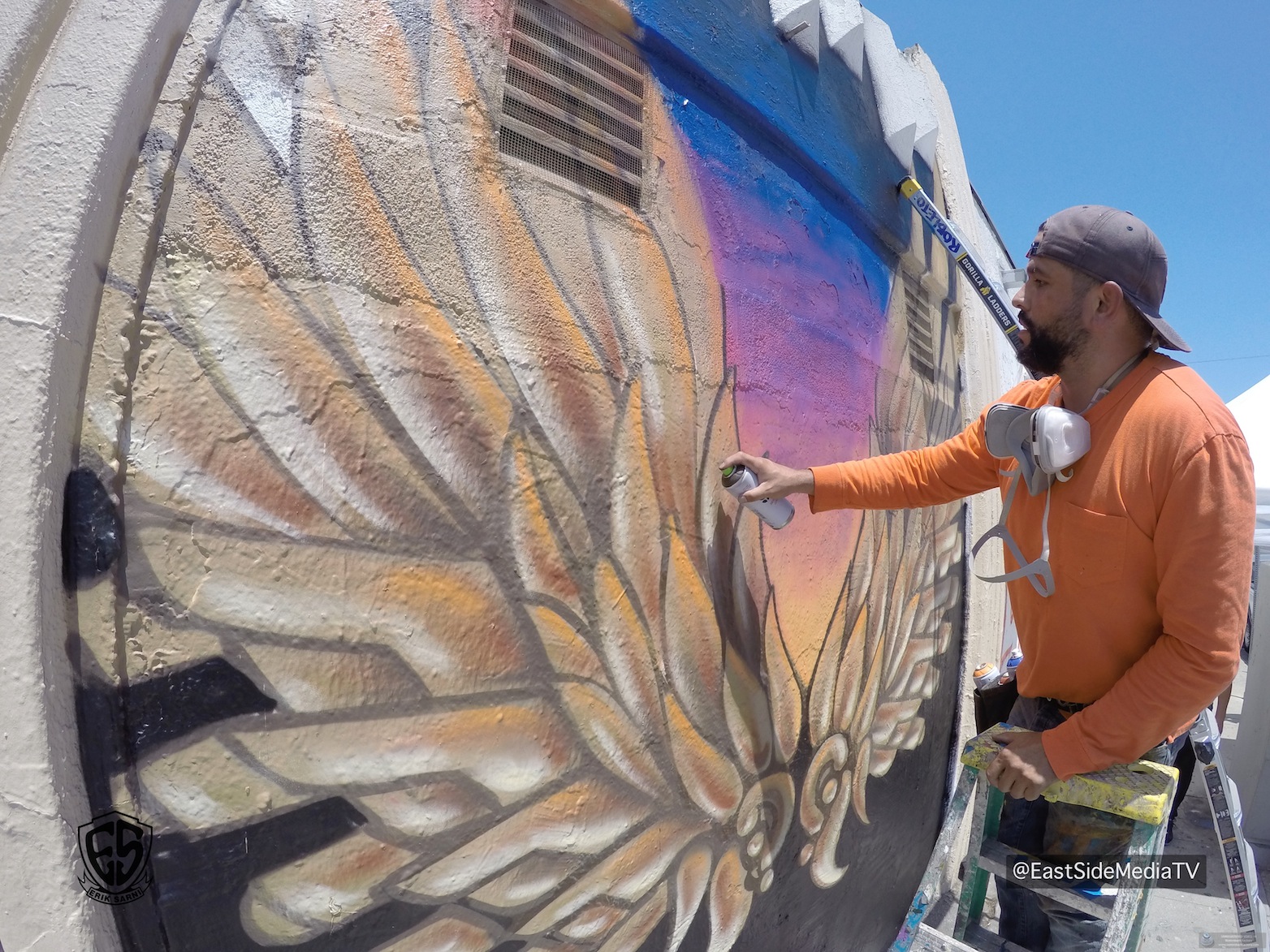 The wings were based on inspiration to show the community that whatever you go through always be a warrior.  “Carnitas El Momo”

The Cuāuhtli is the 15th day of The Aztec Tōnalpōhualli. It technically means 5 eagles. The glyph is highly recognized in the Codex Magliabechiano. A pictorial Aztec Codex. .
.

The mural was conceived by the idea of creating something that was truly angeleno yet strongly rooted in La Raza and our descendancy from The Aztecs. The Aztecs were a warrior society, and the eagle was commonly associated with warriors. Hence: “Wings of a Warrior”. The eagle is brave, daring, fearless and powerful and is amongst the top of the apex predators. The Aztecs found its relevancy and significancy to their warrior-like mentality. The eagle represented power. Therefore the eagle became an integral part to their society; especially The Eagle Warriors society. The eagles… were soldiers of the Sun and the eagle was the symbol of the Sun, again; hence: “People of the Sun”.

Eagle warriors dressed like eagles, adorning themselves with eagle feathers, and wearing headgear with an eagle head on it. The Eagle Warriors were considered the highest ranking warriors in The Aztec society. The deep origin of the Eagle Warriors and their connection to the Divine was what made this animal society sacred. And today we see it fruits in modern-day Mexico as the eagle holds a prominent centerpiece in the Mexican flag.

The wings of the eagle represent strength. Strength to soar high above the storms, difficulties, challenges we face. No matter what, in the midst of it all, we will spread our wings and will soar on wings like eagles; we will run…fly and not grow weary and rise above any difficulty or trial. Isaiah 40:31

So come to Momos and realize you have a purpose. Your purpose is bigger than you have realized…You are an eagle and is time to spread your wings and soar.

Simply drop a visit on the corner of Fairmount Ave and Soto Street and get your wings on. Please hashtag #Cuāuhtli and tag @carnitaselmomo or hashtag #carnitaselmomo .

The eagle is understood in the Mexica culture in several ways, but most of all it is unanimously understood as an empowering and strong symbol. In the case of this mural the viewer becomes part of the piece and is adorned with wings of the eagle. They are strong, brave, fearless, and resilient.